In this article from Wikipedia I have added my replies in red. Many people rely on hearsay and faith to show that the Manned Moon Landings did take place. What we need is science and where the science is thin we must use sound logic. Also, this article is firmly in the court of Apollo landings believers. It is a personal belief rather than a report of the facts by both antagonist, and as such lets Wikipedia down.

Also on this website I do not talk about comedy sites such as the flat earth society. Really they do not believe that themselves but they love the attention. It is purely for entertainment.

[From Wikipedia, the free encyclopedia] 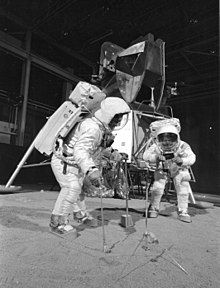 Astronauts Buzz Aldrin and Neil Armstrong in NASA’s training mockup of the Moon and lander module. Conspiracy theorists say that the films of the missions were made using sets similar to this training mockup.

Moon landing conspiracy theories claim that some or all elements of the Apollo program and the associated Moon landings were hoaxes staged by NASA, possibly with the aid of other organizations. The most notable claim is that the six manned landings (1969–72) were faked and that 12 Apollo astronauts did not actually walk on the Moon. Various groups and individuals have made claims since the mid-1970s, that NASA and others knowingly misled the public into believing the landings happened, by manufacturing, tampering with, or destroying evidence including photos, telemetry tapes, radio and TV transmissions, Moon rock samples, and even some key witnesses.

Much third-party evidence for the landings exists, and detailed rebuttals to the hoax claims have been made.[1]   [All the rebuttals have been weak in substance. Some people have even said ‘ It happened therefore they hoax believers are wrong’ where is the science in that?] Since the late 2000s, high-definition photos taken by the Lunar Reconnaissance Orbiter (LRO) of the Apollo landing sites have captured the lander modules and the tracks left by the astronauts [ These ‘high definition photos do not reveal as much as the Google Earth images taken of our planet. The camera used to produce the Google Earth images is over 1,000 kilometers out from the Earth’s surface and looking through a thick atmosphere. Yet still one can see people walking in city streets. The LROC is stationed in orbit about 80 kilometers from the surface of the moon. NASA wants us to believe that the LROC can image boot prints but not show the descent landing module in any detail. Boot prints are about 40 centimeters long. The descent module is 5 meters long. That is 500 cms. If we could see a 40 cm long boot print we could easily see a 500 cm long landing craft.][2][3] In 2012, images were released showing five of the six Apollo missions’ American flags erected on the Moon still standing; the exception is that of Apollo 11, which has lain on the lunar surface since being accidentally blown over by the takeoff rocket’s exhaust [NASA states that the LROC has imaged the shadows of the Apollo flags on the surface of the Moon. If we can’t see the details of a 5 meter long space craft sitting on the Moon’s surface how on earth are we going to see a shadow  25mm wide. It is just not good science and a complete hoax.].[4][5]

Conspiracists have managed to sustain public interest in their theories for more than 40 years, despite the rebuttals and third-party evidence. Opinion polls taken in various locations have shown that between 6% and 20% of Americans [That equals up to 60 million people!], 25% of Britons [15 Million Brits], and 28% of Russians [40 Million Russians] surveyed believe that the manned landings were faked. Even as late as 2001, the Fox television network documentary Conspiracy Theory: Did We Land on the Moon? claimed NASA faked the first landing in 1969 to win the Space Race.[6]

Just using the info above we have a total of 115 Million souls, from three nations only, who are not convinced that the US landed Men on the Moon and brought them back safely.

References are on the main article within this library.

This site uses Creative Commons Attribution-ShareAlike 3.0 for all Wikipedia articles. NASA images are used according to its 'Image Use Policy'. All other content (c) Gregory J Round 2017

Scroll back to top